See 10 related articles at the end of this post -ED

Note: TCW (from much evidence) views non-priest Marcel Lefebvre, to have been a "plant" of (by) the masonic novus ordo. His role: "To control the opposition".

"We wish it to be your rule first of all to tear away the mask from Freemasonry, and to let it be seen as it really is..." -Leo XIII, Humanum Genus (Encyclical On Freemasonry)

Why Marcel Lefebvre Was Never A Priest Or Bishop

a) "Sacrament of Order." In this sense, Aquinas distinguishes that he means "...as a sacrament... every Order is directed to the sacrament of the Eucharist. Wherefore since the bishop has not a higher power than the priest, in this respect the episcopate is not an Order." The episcopal elevation does not place any indelible character upon the soul. Thus, the candidate for the episcopacy must already have been validly ordained. This is the point that the SSPX tried to obfuscate in their 1988 Angelus article they released attempting to defend against the exposure of Liénart's Freemasonry and his 1947 attempt to elevate Lefebvre. They attributed Lefebvre's validity as having come - not from Liénart - but from the episcopal power of the two valid co-consecrators present with Achilles Liénart in 1947.

SSPX argued hypothetically that even if Lefebvre had never been validly ordained in 1929 by Liénart because Liénart was a Freemason prior to his 1928 episcopal elevation, and therefore Liénart was never a valid bishop, nevertheless, the episcopal elevation ceremony of 1947 would have automatically made Lefebvre a priest. How? Because, they said, that part of Q. 37 says the previously never-received lesser powers of Orders are automatically provided by reception of the higher power of Order (ordination). The SSPX author then extended (erroneously) this Q. 37 principle Lefebvre's elevation, thus declaring Lefebvre a valid bishop, even if he had never been a validly ordained priest from 1929 to 1947.

But I argue that the SSPX had to deliberately withhold the teaching of Summa Suppl Q. 40 Art. 5 Reply to Obj. 2 which clearly states that the episcopal elevation does not place a character on the soul - it merely provides more grace to assist the bishop in his responsibilities - and that the episcopal candidate must have a previous valid ordination. And so to counter that fact, the SSPX two years later came up with another article in the Angelus now arguing that one has to accept the elevation of Liénart in 1928 as being valid - even though they do not deny he was a Freemason - on the belief that since no one could know his mind at the time and that he had a proper episcopal elevation ceremony, then we must assume (*False, not the whole of the teaching. They likely KNOW this. -TCW) he had the minimal proper intent. Mr. Donald Sanborn in Brooksville, Florida, makes this same argument today.

*"With this inherent defect of 'form' is joined the defect of 'intention' which is equally essential to the Sacrament. The Church does not judge about the mind and intention, in so far as it is something by its nature internal; but in so far as it (intention) is manifested externally she is bound to judge concerning it." -Leo XIII, Encyclical Apostolicae Curae (Against the validity of Anglican Orders).

In response, I argue that the continued high-ranking *membership of Liénart in the Freemasonic Religion - including his gleeful, deathbed statement in 1973 (that the "...Catholic Church is dead.") - is itself a manifestation of his intent, as a **Freemason, i.e., to destroy the Catholic religion, a well documented primary goal of Freemasonry.

*Lefebvre himself (in an act of damage control) acknowledged that Achilles Liénart was a Freemason in a tape-recorded talk he gave in Montreal, Canada on May 27, 1976. Yet, then, stated that it did not adversely affect the validity of his own Orders. (FALSE!!) -ED

**“[T]hose secret societies of factious men who, completely opposed to God and to princes, are wholly dedicated to bringing about the fall of the Church, the destruction of kingdoms, and disorder in the whole world…Their law is untruth: their god is the devil and their cult is turpitude… Our predecessors, Clement XII, Benedict XIV, Pius VII, Leo XII, repeatedly condemned with anathema that kind of secret society…” (Traditi Humilitati - Encyclical of Pope Pius VIII, May 24, 1829)“[S]uch that they profane and defile the passion of Jesus Christ by certain of their impious ceremonies, that they despise the Sacraments of the Church (for which they seem to substitute other new things invented by themselves through their supreme wickedness) and despise the very mysteries of the Catholic Religion and that they overthrow this Apostolic See against which, because on it the Sovereignty of the Apostolic Chair has always flourished, (S. Aug. Epist. 43.) they are roused by a certain unparalleled hate and they devise every dangerous destructive plot.” (Constitution of Pope Pius VII – Ecclesiam a Jesu Christo – 9/13/1821)

"Reply Obj. 2. Order considered as a sacrament which imprints a character is specially directed to the sacrament of the Eucharist, in which Christ Himself is contained, because by a character we are made like unto Christ Himself. Hence, although at his promotion a bishop receives a spiritual power in respect of certain sacraments, this power nevertheless had not the nature of a character. For this reason the episcopate is not an Order, in the sense in which an Order is a sacrament. "Reply Obj. 3. The episcopal power is one not only of jurisdiction but also of Order, as stated above, taking Order in the sense in which it is generally understood (i.e., it is a Sacrament of Order as an Office "in relation to certain sacred action...in relation to the mystical body", not a character-imprinting Sacrament of Order.)

The Church’s minimum requirement for accepting the validity of a Sacrament is “moral certainty.” Moral certainty is one “which excludes all prudent fear of error, such that the opposite is reputed as altogether improbable."

"His (St. Thomas Aquinas') writings are without error, and he himself is the most glorious champion of the Catholic faith." -His Holiness, Pope Leo XIII

(Contains historical record [writings] of Talleyrand regarding his sacramental intention)

(Note: Bp. Thuc's alleged "consecrations" are viewed by the Hierarchy [in exile] as "doubtful at best".)

Dr. Coomaraswamy Changed His View TO that Leinart WAS Indeed a Freemason

"Every Man for Himself Sacraments Regardless of the Law"

Blessed be St. Peter, Prince of the Apostles! 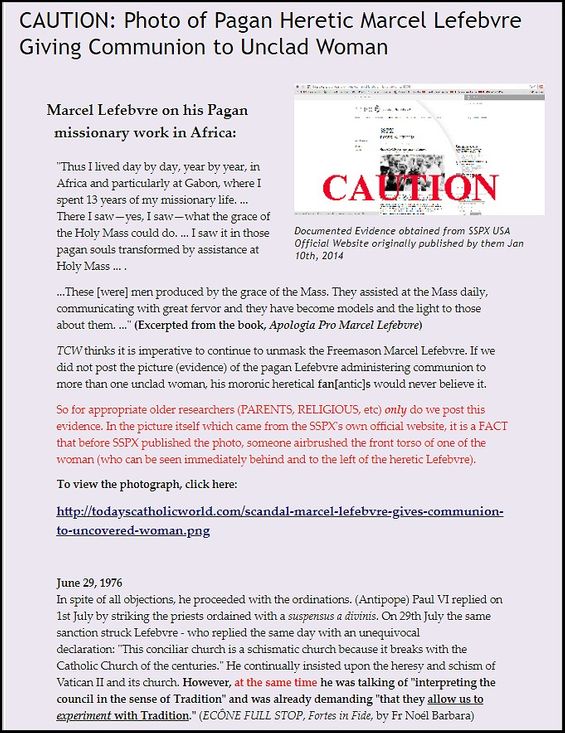 I do not believe a word of this about Bishop LeFebvre, one day he will be canonized, it is because of him that we still have the true mass, the mass of all ages

You don't cite any specifics of the facts posted above... Note: Lefebvre was NEVER a priest or of course a bishop. There were many who saw through his calculated fraud/deception from "the get go". For argument sake only (cont.)

let's hypothetically say Lefebvre was a Catholic bishop with jurisdiction from a pope. Just one intelligent writer from 1977, William F. Strojie, blasts a devastating hole in your "reasoning", when he wrote: "If a bishop ordains OUTSIDE (cont.)

...the Church's jurisdiction and sets up a string of chapels internationally, for dispensing the Sacraments, that quite plain is a schismatic operation, or the word has lost its meaning." Source: https://tinyurl.com/Strojie-Confounds-Lefebvreism

I am attending mass before at SSPX now that I read this articles I am confused what to do.....

You need to: (1.) Fully reject non-Catholic worship such as the Novus Ordo Sect/SSPX & all Pseudo-Traditionalists Sect(s). (2.) Make a Perfect Act of Contrition. (3.) Meet with True Catholic clergy for efficacious Sacraments.

Dear TCW, If SSPX is not of God, then, where does one go for the true Mass and true priests? Thanks for your response.

Hi. Sacraments in order to be efficacious for one's soul, need to be offered under the jurisdiction of the True Hierarchy/Pope. It is like the times of the catacombs, currently. For more info go to: tcwblog.com/183078572

Regarding your article, "Lefebvre Giving Communion to Unclad Woman" ... that's what all the "trads" bark about Wojtyla ("pope" JP2) doing ... yet total silence when it's their Master caught in the same blasphemous action.

Four more articles were linked to the NON-priest Lefebvre page.

The inside word from "those in the know" is that Lefebvre lived "high off the hog" in Africa. He was known as "lord of the Bush" there. Eyewitness reports are his luxurious lifestyle continued at his ANTI-traditional sect's HQ's in Écône, Switzerland too.

Perhaps that is where the pagan, antipope JP2, learned it? Shocking!

I have never seen this scandalous picture of Lefebvre prior to this. What will his happy cheerleaders say about this?

I just fact checked this. The scandalous pic of a Lefebvre is currently posted on SSPX main website. He indeed was a plant.

"Destroy, then, in me whatever may displease you or resist you; w...

Thank you N.S. in Macerata, Italy (this Advent) for your generous suppor...

The uniform norms for fast and abstinence adopted in 1951 by the bis...

TCW READERS: The Eve of the Feast of the Immaculate Co...